To figure out who had control over what area, we engaged in numerous steps.

First, we began with the work of Alan Kuperman, which was informed by information provided by the U.S. Defense Intelligence Agency and General Henry Kwami Anyidoho's book "Guns Over Kigali: The Rwandese Civil War - 1994."  All images will be placed on this webpage.

Second, we compared the initial starting points of the FAR locations to maps of military bases provided by the ICTR.  These files are way to large but if one is interested in obtaining them contact us.

Third, these figures were updated with information provided by the CIA (i.e., Freedom of Information Act, Africa Review, Rwanda-Burundi Briefs and National Daily Reports) as well as information provided in a book by Captain Josue Abdul Ruzibiza (“Rwanda the Secret History”), which seeks to describe the events surrounding the Rwandan genocide and civil war with a focus on the RPF actions and troop movements.  This is discussed further below.

Fifth, we worked with an expert in Arcview GIS to: 1) identify troop locations, 2) establish the battlefronts and 3) apportion deaths to the respective FAR, FAR-RPF and RPF territorial jurisdictions.  As the French occupy parts of Rwanda during the conflict, we also had to account for their jurisdictions as well. Our strategy for this is provided here.

Captain Josue Abdul Ruzibiza was a Captain in the RPF until he left.  For his background and a statement of why he decided to discuss what he did, see his press statement.  Here is his wikipedia site.

We struggled somewhat with the language used by Ruzibiza.  Below, we discuss how he explained what the graphs represent (this is from private correspondence).  The first image shows initial positions in April. 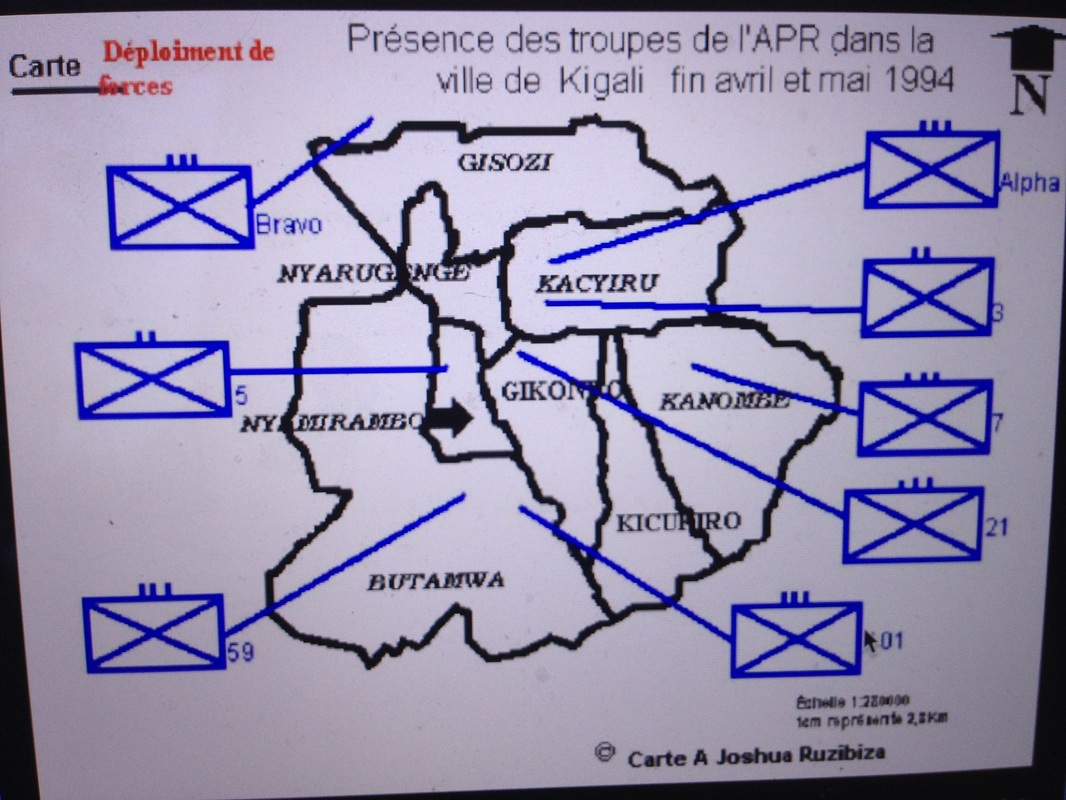 7th and 157th mobile units of the APR

--The direction I am proposing is for the Bravo, 211st, and 101st mobile units

Bravo and 59th mobile units of the APR 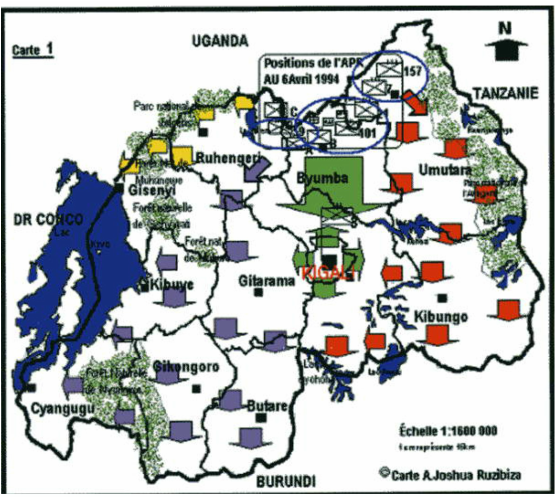 Alpha, Bravo, Charlie, and 59th mobile units of the APR 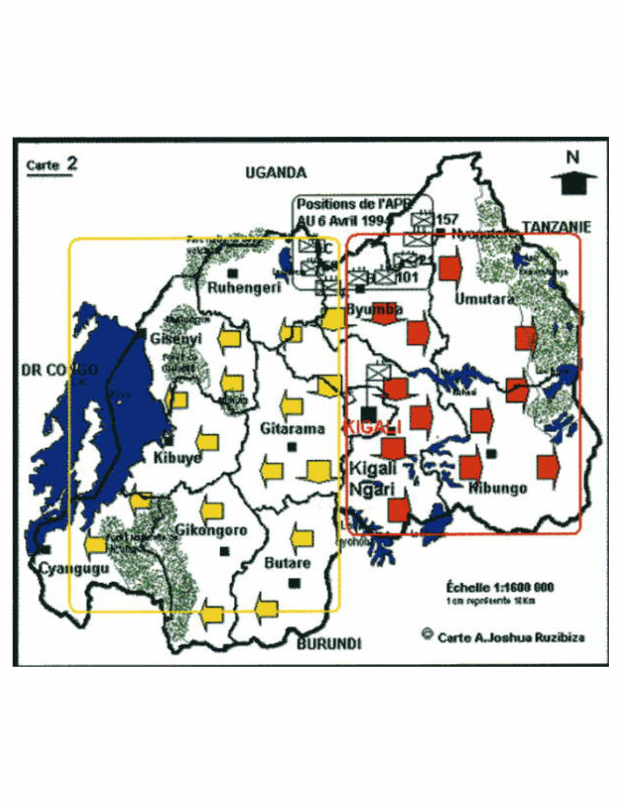 --The arrows show the direction that I propose.  For the rest, the colors and symbols are

the same as on Map 1 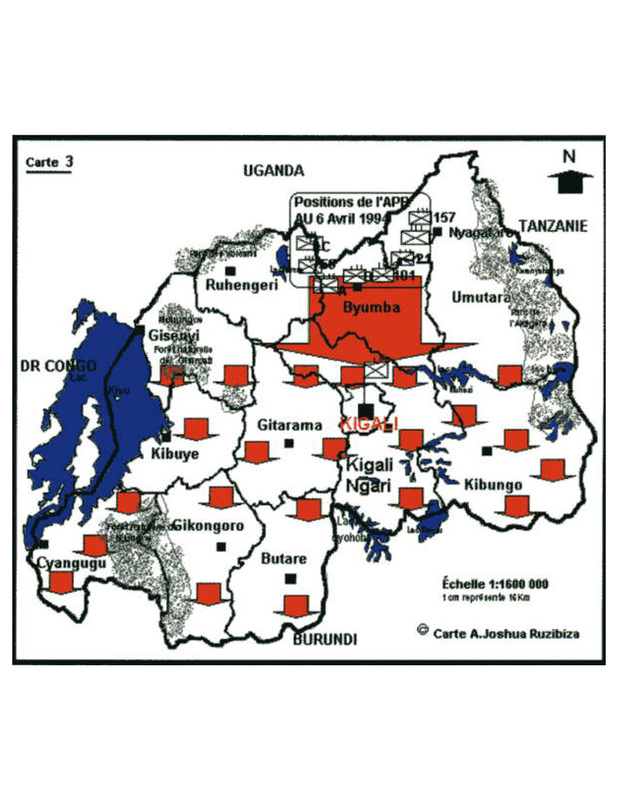 --Movement of the APR troops toward Kigali (Alpha, Bravo, 59th, 101st), respectively on

MILITARY ABBREVIATION] of Butare toward Gikongoro, from the 59th toward Kibuye,

of the 7th, 9th, Bravo, Charlie toward Ruhengeri and Gisenyi

--The units that advance together 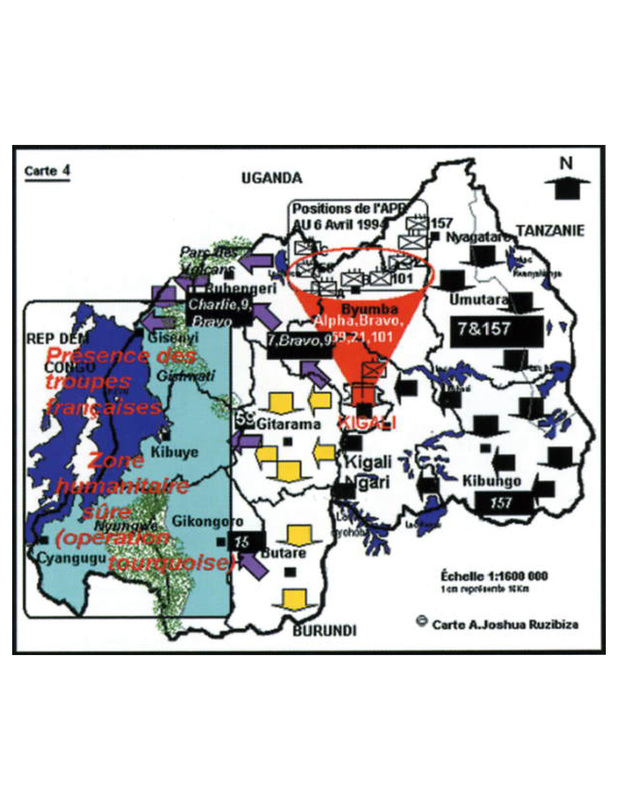